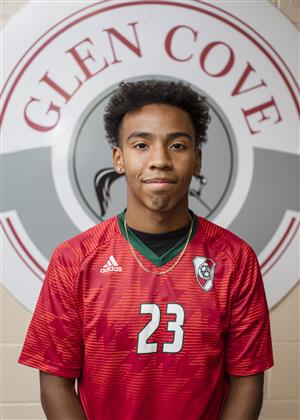 “Londell is a box-to-box midfielder that also features as a dynamic striker. In the graduating class of 2023, he has the most goals scored. Londell’s immense versatility enables him to facilitate as a playmaker, finisher, and shut down defender. Londell’s ability to operate in tight spaces is what separates him from everyone else. Londell has innate passing, control, vision, and has extremely high game awareness. He is always connected to every player on the field. Londell is a leader and will do everything possible to help the team win. Londell, an All-County award winner since his Sophomore year, is simply one of the very best players on Long Island.” Glen Cove City Schools Soccer Coach Brian Smith

“Londell is a student athlete that is a true role model on and off the field. His peers, teachers, administrators and staff all admire and respect him tremendously. I am extremely proud of Londell for all his hard work and dedication to our soccer team. I wish him the best of luck in the remainder of the season. Keep up the great work!” Glen Cove City Schools Athletic Director Kimberly Riso

"I have known Londell from his elementary school days at Connolly School and will say he is a true student-athlete. With support from his parents, he has worked tirelessly to excel on the soccer field and basketball court, all while taking Honors and Advanced Placement classes at Glen Cove High School. Simply put, Londell embodies what is possible when Talent, Hard Work, and Determination are aligned. I wish him all the best, keep up the great work, and continue to represent GC proudly. Glen Cove High School Principal, Allen Hudson III

“His versatility – passing, scoring and controlling a game between the boxes – is a huge reason why expectations are high for a Knights team that reached the Nassau Class A championship game. Coach Brian Smith praised his control, vision and game awareness and added that “his ability to operate in tight spaces separates him from everyone else.” https://www.newsday.com/sports/high-school/boys-soccer/top-100-players-2022-peihu5e4 Newsday, Roger Rubin and Brian Heyman